Mystère is one of Cirque du Soleil’s more athletic productions – and that’s saying something! Mystère provides a complete spectrum of awe-inducing entertainment with colorful sets, this show is one of their most dazzling and spectacular shows. Don’t miss out on your chance to watch the beautiful show. 100% Guaranteed Tickets For All Upcoming Las Vegas Shows 2022/2023 at the lowest possible price.

Mystère by Cirque du Soleil provides a complete spectrum of awe-inducing entertainment with colorful sets, imaginative costumes, and highly-skilled performers. The performers fly around overhead, swathed in luxurious silk. Some audience members may interpret each act as an allegory, but with the innovative costumes and performances, realizing those themes isn’t necessary for enjoying this show.

Mystère is also comedic though, offering moments of pure laughter from its hilarious MCs. As a result, it is highly suitable for adults and children. Mystère is charming, family-friendly, and one of the most amusing Cirque du Soleil shows in Las Vegas. Taking place at the Mystère Theatre at Treasure Island most days, the show is inspired by a number of different cultures, Mystère takes from circus acts, acrobatics, and street performers, along with a little old theatrical influence with Commedia Dell’Arte.

The aerial acrobats will blow your mind, and the stunning set adds to the magical spectacle in front of you. It’s a gorgeous and colorful production full of amazing acrobatics and plenty of comedy to lighten the spellbound atmosphere.

Powerful athleticism, high-energy acrobatics, and inspiring imagery fill the air. Deemed a theatrical “flower in the desert,” Mystère thrills audiences with an exhilarating blend of whimsy, drama, and the unimaginable. It offers the ultimate discovery that life itself is a mystery. They leap from one trapeze to another at dizzying heights. The Chinese poles are also used to create a stunning display of choreography.

Even if you get covered in popcorn, you won’t want to stop the clown from posing as an usher and engaging in some pre-show debauchery with the crowd. With his black suit and disheveled gray hair, he has no problem amusing people. The clown is zany, mischievous and your first exposure to the unknown at Mystère at Treasure Island. What’s ahead is a wondrous world of mystifying creatures who perform a series of incredible acrobatic and gymnastic feats. From rebirth to the pursuit of happiness, each of the characters and acts in Mystère symbolizes something different. They combine to create an overall theme for the show as a celebration of the circle of life.

And if you’re looking for the opportunity of a lifetime, look no further than the IN THE WINGS VIP experience.

Here, you’ll join the cast onstage for a high-five moment during the final bows and sip on a glass of champagne during an exclusive artist meet-and-greet as a professional photographer captures the moment. Of course, VIP seats will have you up-close and personal to all the onstage action. And oh yeah, there will be a VIP Guide onsite to escort the party throughout the theatre, too. Enjoy. 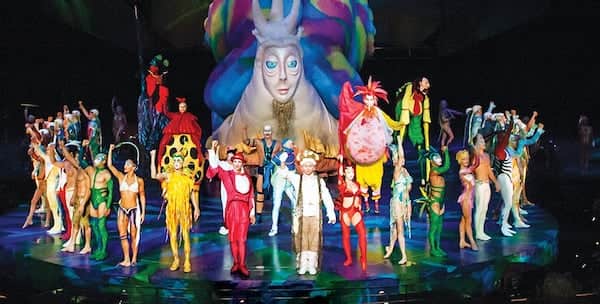